Monday and Tuesday runs without a camera

After a couple too many shandies this weekend I thought I'd try and take the dog out for some slightly longer runs than normal this week. Both days have been broken cloud and showers but really spectacular. I kind of wish I'd taken my camera but then again sometimes it's nice to enjoy a scene without one.

For example on Monday I sat on one of my favourite spots, a stone in a field just off the Pennine Bridleway above Malcoff. It is just the right size to sit on and admire the expansive view of Chapel, Eccles Pike and Chinley Churn whilst the dog can have a sniff about and wait for any jelly babies or other treats i can find in my pockets. I'm not sure if you should feed dogs sweets but half a jelly baby can't be too bad can it?

The lower hills around Chapel looked very green especially in the mixture of bright light and shadow caused by the broken cloud. The moors of Combs Moss were dark brown and backed by a heavy black cloud lurking behind them. This cloud was the remainder of a shower that had just passed meaning the ground was sodden. Every blade of grass was individually reflecting the strong sunlight. In fact it was like the exposure was turned up too high and everything had a bright metallic sheen. There was also the faint sound of water draining off everywhere, although this was drowned out to an extent by the strong wind blowing across the field. The wind was strong but I enjoyed it as it was creating blowing patterns across the grass and carrying the numerous small birds about in wild swooping loops as they called to each other.

By now the dog looked very relaxed so I decided to set off down the long field again towards home. This annoyed her and she started chewing on my leg as she does in times of great injustice. I didn't mind though as my commute home was a distant memory and I felt very glad to live where I do.

Nice run tonight up to Froggatt from Grindleford, there was the potential for a nice sunset but the clouds won in the end and kept it s bit gloomy except for the odd sunny spell. There was lots of bluebells in the woods, but i don't seem to be able to take nice photos of them, they look a lot nicer in real life!

Anyway, i did some sprints with the dog, played some sticky and admired the forest views. There was a lot more people out in comparison to going in the dark, which was o-kk except for when i couldn't open a gate until some guy pointed out all i needed to do was push. Doh. Maybe i should have set the dog on him as a punishment, she could have cuddled him to death or something. Or played sticky until he died of exhaustion three days later (this is the way i am destined to go). 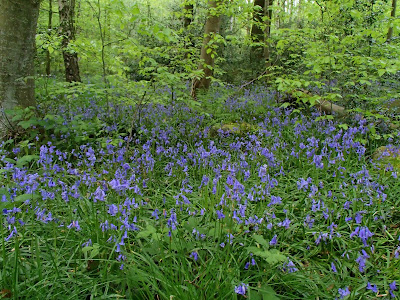 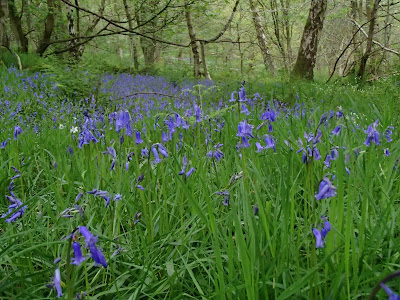 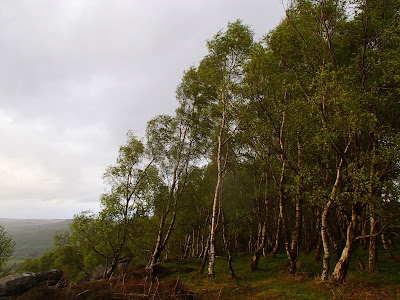 Some nice trees in a bright spell. 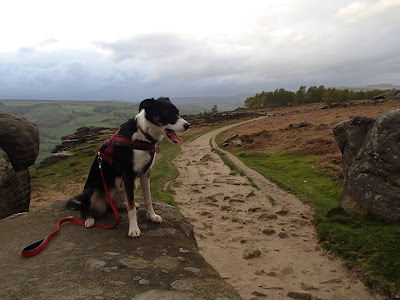 Dorp the dog resting and contemplating eating the bog paper round the corner. 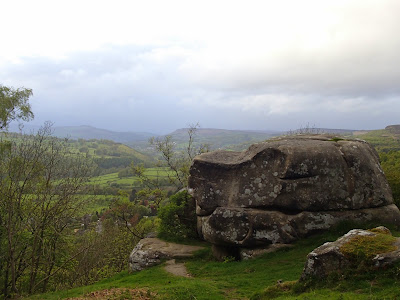 Went for a great walk on Saturday with Richard, Alex and the pooch. We did a route known to some as the kinder crab walk, which takes advantage of a ledge that cuts right across the right hand buttress of the downfall amphitheatre. After following the kinder river up from the reservoir, we attached the dog to some walking rope and ascended the first part of arpeggio gully by ignoring the gully and waking up the heather next to it. Then followed the ledge system which was really nice, and a great deal less unnerving than when we did it icy conditions earlier this year. After that was over we laid about in the sun under the downfall, which was marvellous, especially as I'd been struck down with a terrible disease akin to a hangover. I love lounging in the sun after some physical activity and it was hard to leave. 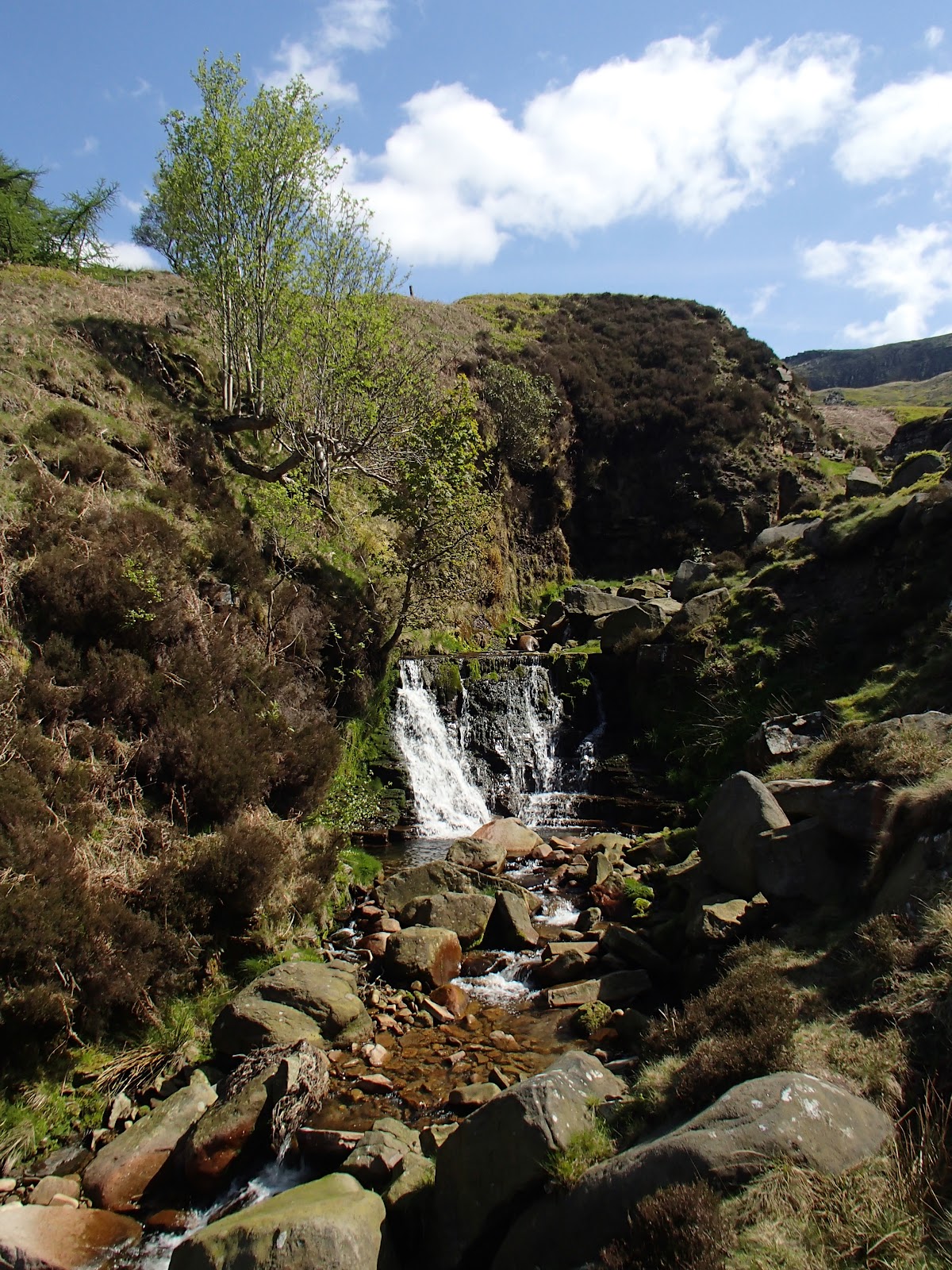 Kinder river on the way to the downfall 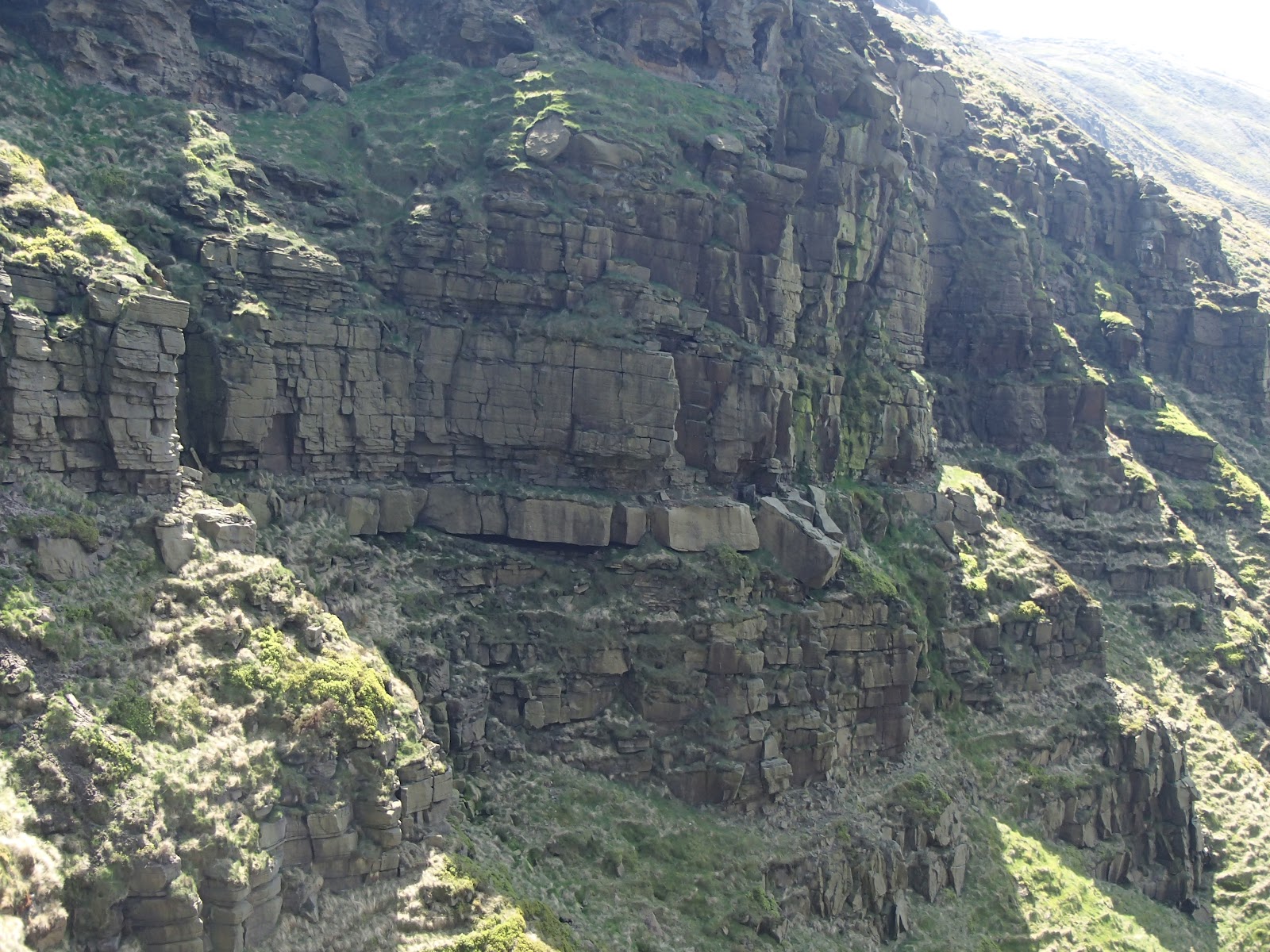 The ledge cuts across the buttress right to left, seen in this picture. 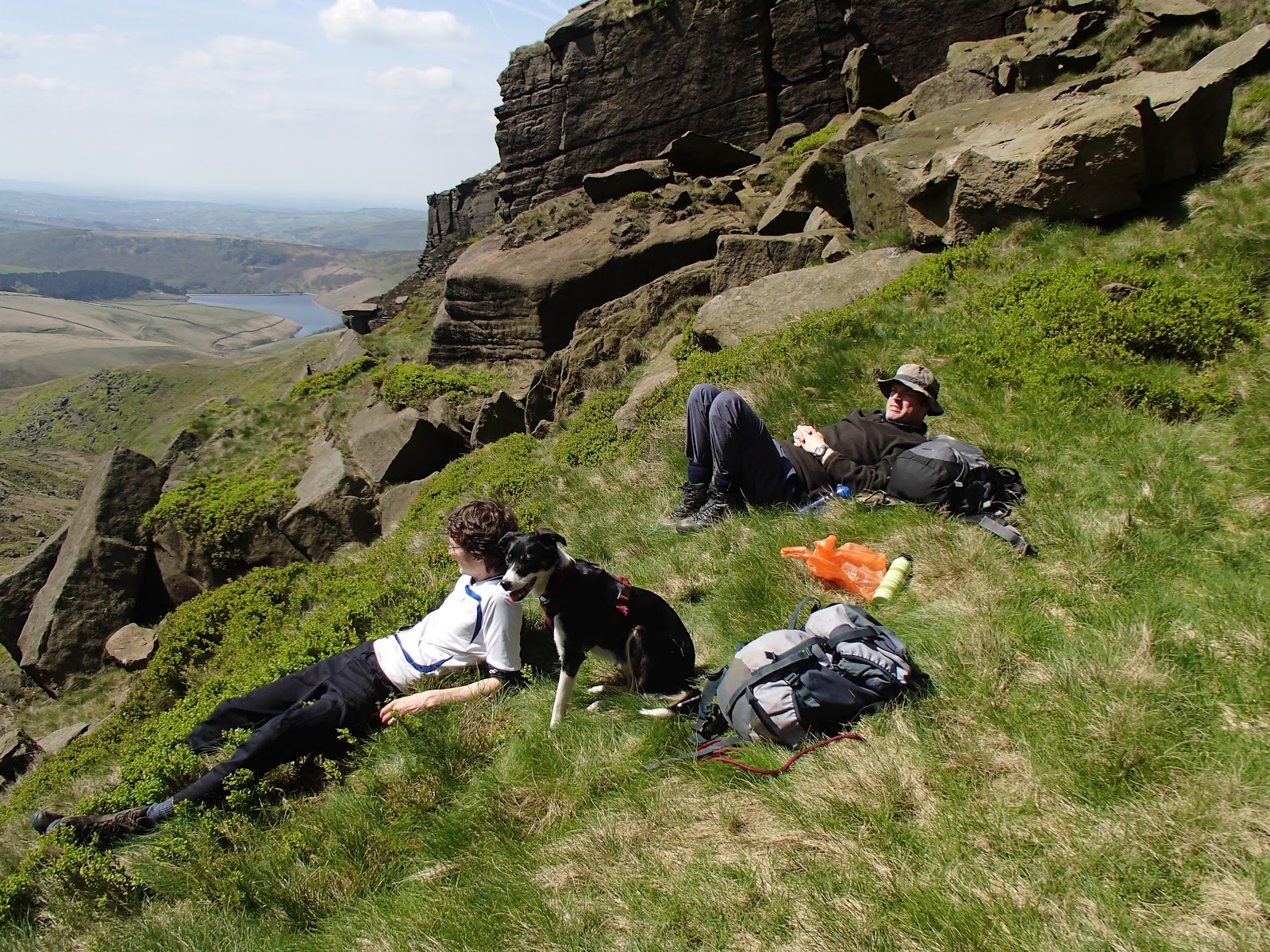 Relaxing in the sun


The final bit of difficulty/fun was udging our way up through square chimney. The dog went first with Richard via a dog hoisting method. She seemed ok with it but probably wont make a habit of it! Alex had a go and didn't fancy it unroped so went round the buttress at the bottom. My turn came and i had a hard time of it, eventually emerging from the hole the wrong way up and with a mild film of fear on my forehead. It was never in any doubt i told myself but silently cursed these damned gritstone chimneys!
Posted by Unknown at 13:07 No comments:

I wonder if pictures are the right size now... 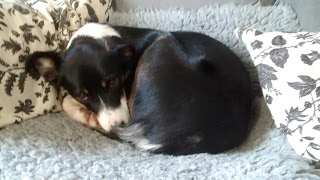 Trying to get this working on me tablet. Its a pain in the arrrse! 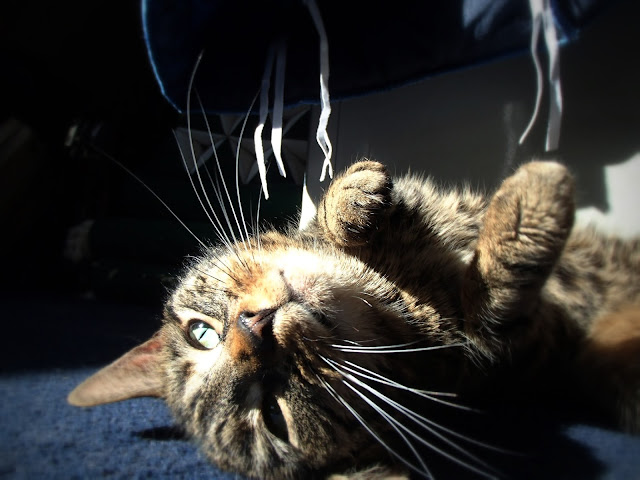 Saw the weather forecast and deduced using my amazing meteorological talents (there was a fog symbol) that there might be an inversion, so decided to get up early with the dog and go and see if i could get above it.

It was a bit dark for good photos but indeed a fine layer of fog lay in the valley and half way up south head we emerged into lovely clear morning air.

I took ages taking photos then realised i was going to be late for work so dashed back and had to go to work smelly as i didn't have time for a shower. Not sure anyone noticed the difference though.. 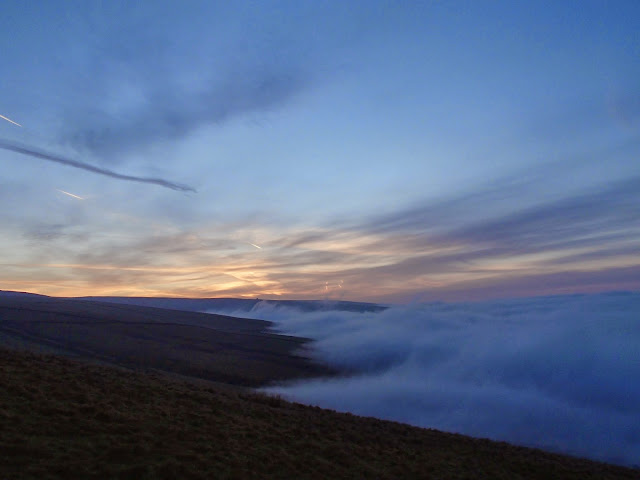 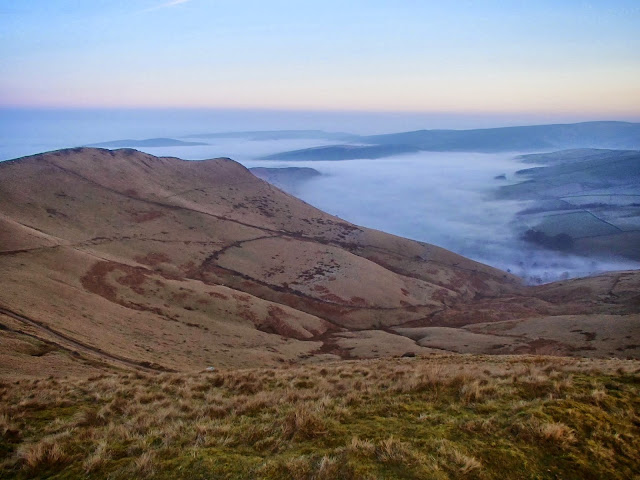 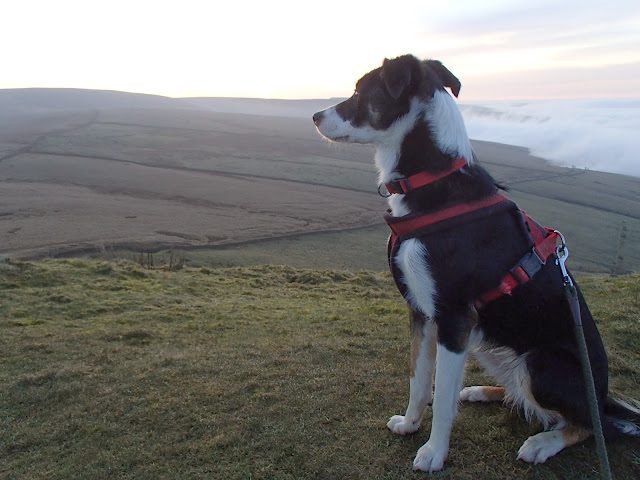 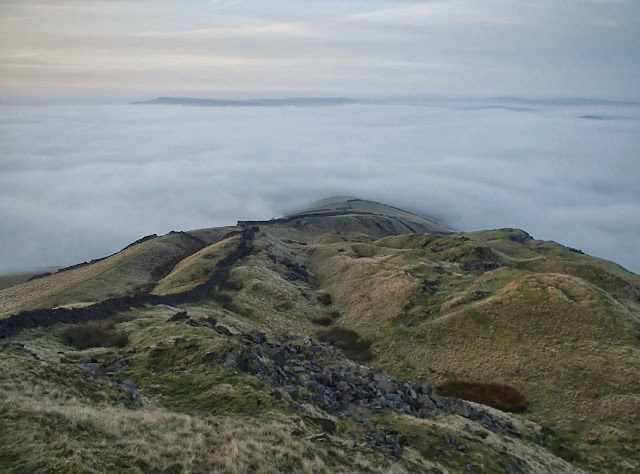 So, went for a pleasant mountain bike ride with Steve and Trevor today. Weather alternated between bright sunshine and heavy haily showers but was on the most part good. Started from Steve's in Marple bridge and proceeded for a short distance before stopping for some saddle fettling. This would turn out to be the theme for the first part of the ride, as Steve and I hadnt ridden our bikes for some time resulting in lots of annoying failures. At one point my rear wheel fell off, i must have not tightened it after bleeding the brakes ages ago.. woops! Luckily i was going up hill at the time so no damaged occurred to bike or alun.

So after a rocky start (fnar) we made it to the track leading up to the shooting cabin, which was tricky as always, then a nice descent down into hayfield for a cup of tea and cake. This is a feature of cycling with other people that i like, i never feel like stopping on my own. So cake consumed we headed off into a hailstorm, which made me quite cold but soon cycling up to lantern pike warming me up, then the sun came out and it was fine for the rest of the ride.

At one point we passed the mysterious robin hoods picking rods, which steve had warned me not to get too excited about as it was just a couple of stones. Which it was, but at least i saw them and could marvel about their origin. Soon we were back at the car and ready to come home and clean my bike. A fine day completed!